(Note: this post originally appeared here as part of my internship with the Center for Health, Environment and Justice.)

When you think of the best place to install solar panels, does sunny California come to mind? How about when you consider where wind turbines are best constructed?

Well, we might all be thinking about these questions in the wrong light. According to new research [i] from Carnegie Mellon University’s Center for Climate and Energy Decision Making, the benefits associated with installing renewable energy generation in the form of wind and solar varies greatly across the country, and are often greater in states not normally associated with the technologies.

The report, “Regional variations in the health, environmental, and climate benefits of wind and solar generation,” was authored by Kyle Siler-Evansa, Inês Lima Azevedoa, M. Granger Morgana and Jay Apta and accepted into the journal Proceedings of the National Academy of Science this spring.

The researchers’ main findings were that sites with the greatest social and environmental benefits from wind and solar power are not necessarily the sites with the greatest power generation potential. While southwestern states like Arizona or Nevada have the greatest solar power generation capability, solar panels constructed in New Jersey actually have 15 times greater environmental and social benefits that solar panels constructed in the Southwest. Similarly, a wind turbine put up in West Virginia would displace twice as much carbon dioxide as a turbine constructed in California.

“When wind or solar energy displace conventional generation, the reduction in emissions varies dramatically across the United States,” the authors wrote in the report. “Depending on location, we estimate that the combined health, environmental, and climate benefits from wind or solar range from $10/MWh to $100/MWh, and the sites with the highest energy output do not yield the greatest social benefits in many cases.”

These variations make sense when you consider the existing power sources of the states in question. While it is true that Arizona has more sunny days than New Jersey (211 sunny days in Phoenix, AZ vs. 93 in Newark, NJ) [ii], solar panels installed in New Jersey displace more electricity generated by burning fossil fuels than they do in Arizona. 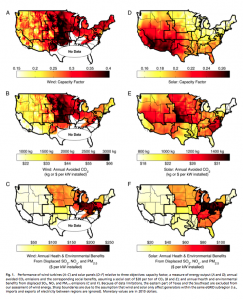 Figure 1, from the report, showing regional variations in solar and wind capacity and the associated benefits and displaced emissions. Darker areas represent higher capacity or benefits; note the bottom images (C & F) that depict the greatest benefits to be achieved from wind and solar installations, respectively.

Comparing emissions data supports this conclusion. For example, according to the US EPA’s Clean Energy Power Profiler [iii], sulfur dioxide emissions in Newark, NJ are 4.60 pounds per megawatt-hour of electricity generated; in Phoenix, AZ, sulfur dioxide emissions are a much lower 0.62 pounds per megawatt-hour, due to the region’s higher proportion of renewable energy and cleaner-burning natural gas electricity generation.

“Similarly, despite the excellent resource, a wind turbine on the plains of Montana displaces 45% less CO2 emissions than a turbine in West Virginia,” the authors wrote. “These results are driven primarily by regional variations in the generation mix: there are significantly greater benefits when wind or solar displace coal- or oil-, rather than gas-fired, generators.”

What does this mean for renewable energy generation? Should we give up on solar panels in the desert and wind turbines off the ocean coast?

Not at all — we should instead change our way of thinking about implementing renewable energy across the country. The authors suggest that current production-based subsidies for wind and solar do not adequately reflect the varying costs and benefits of the technology (federal subsidies are the same across all 50 states).

Instead, subsidies could be based on where wind and solar installations would hold the greatest environmental and social benefits, so as to encourage investors to back projects in areas where renewables would displace greater amounts of pollution-heavy coal and oil electricity generation.

Additionally, this research brings to mind the issue of this country’s fragmented, outdated electrical grid that generally disperses electricity generated to users close to the site of generation. More investments in infrastructure improvements and cross-country transmission lines could allow renewable energy generated in the West and Southwest to be used in more easterly locations, meaning that additional wind and solar installations in high-generation capacity areas could displace carbon-intensive generation operations thousands of miles away.